The Cypher System RPG by Monte Cook Games is based on the core gameplay mechanics established in Numenera and The Strange. The Cypher System rulebook provides a generic roleplaying system that can be adapted to a wide range of genres including science fiction, fantasy, horror, modern, and superheroes. The second edition rulebook was released in 2019 and is supported by a number of genre and campaign books such as The Stars Are Fire and Predation.

I have a weak spot for generic rule systems and I’ve always wanted to try out Numenera and the Cypher System RPG. One of the elements that I am most excited about is the emphasis on exploration and discovery, two elements that I am very passionate about in my gaming.

We will be rocking the second edition Cypher System rulebook as the baseline for this campaign. One challenge to the Cypher System is that there are relatively few published adventures. Given the generic nature of the system even the published adventures may not quite fit the campaign style you are looking for. Established worlds such as Predation or Gods of the Fall do have a couple of official modules each. Another source of content is through the Community Creator program on DriveThruRPG. 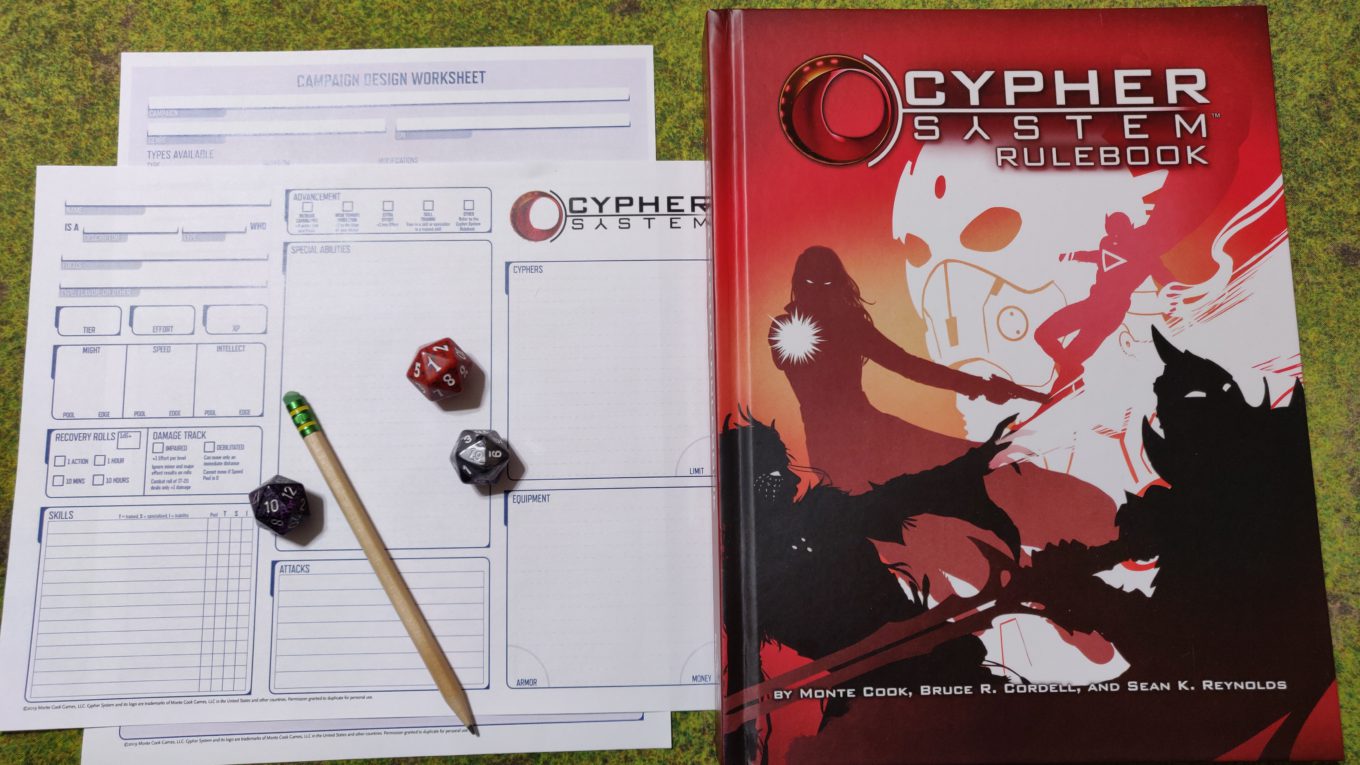 Given the mini-campaign nature, I opted to diverge from the usual Tabletop RPG Sampler methodology and went homebrew on the campaign setting. I am borrowing liberally from the background for the Predation setting along with shows such as Terra Nova to set the background as Earth during the Cretaceous period.

Humanity struggles to exist on a future Earth that is collapsing under the weight of overpopulation, diminishing resources, and pollution. Corporate scientists experimenting on new forms of energy generation opened a stable gateway to an alternate Earth over 69 million years in the past. Soldiers and scientists were sent through in small teams at first to scout the area and harvest anything of value to bring back for further research.

Gradually these excursions grew in size and length until a base was established and eventually a settlement. Groups of settlers were sent through the portal to help further populate the fertile river valley, all in the name of the corporate bottom line. This pattern continued for almost a decade with the human population in the valley radiating out from the primary settlement to numerous research labs, outposts, and harvesting operations. Several forms of plant life were found to be well adapted to the future Earth’s elevated levels of carbon dioxide and of course there was always a market for genetically modified dinosaurs.

The gateway was not to last, and one day it destabilized and collapsed without warning, stranding the 16,000 inhabitants of New Hope Valley. That event was 20 years ago, and the shiny corporate buildings and high technology have largely given way to a simpler lifestyle and people struggle to survive on their own without the outside help from home. New settlements have been built, most away from the purview of the remaining corporate organizations, and people have relearned the skills to farm and tame the land.

Every day is a struggle for survival in this new world. Explorers earn their way by salvaging technology and resources from the abandoned labs and outposts that dot the landscape. Built during the initial waves of exploration, many of these facilities were built in secret for a specific purpose. Discovering a previously hidden site could yield a treasure trove of tech to sell to the highest bidder. But you must be wary of rival explorers and the environment itself which has grown to appreciate the taste of human.

The Elder Minion and Lord Oberon each created a character using the options from the Cypher System RPG rulebook.

Lord Oberon – Corvus Wolfe is a Graceful Explorer who Moves Like the Wind.

We are all incredibly excited to dive into this system to check things out. Stay tuned for more updates to come.