Shadowrun: Sixth World is a science fantasy roleplaying game set in the year 2080. The sixth edition of the game is published by Catalyst Game Labs and was released in 2019.

Shadowrun as a setting has long intrigued me. The mix of cyberpunk and fantasy elements makes for a truly unique setting. My first exposure to the world was via the Sega Genesis game, released in 1994. The local card and comic book store had a selection of NES, SNES, and Genesis games for rent and was always a better deal than the video store because you could keep the games for a week at a time. I was sorely disappointed when the week was up and I had to return the game, but the memory of Shadowrun never left me.

The Elder Minion has also shown a great deal of interest in the setting itself, though I imagine the Beginner Box cover art and the map of Seattle included helped spark that interest.

While I was considering going back to one of the earlier editions for this playthrough, I noticed that the new edition had a beginner box readily available and that sealed the deal. My hope was that we could focus on the getting started rulebook as our baseline and leverage as much of the contents as possible to really stretch the value from the beginner box as far as we could.

I’ve finished a quick readthrough of the starter rules and I’m looking forward to rolling fistfuls of d6’s. I know the Elder Minion feels the same.

For our mini campaign we will be using the Shadowrun: Sixth World Beginner Box for our ruleset and characters. The included adventure, “The Battle Royale”, will be supplemented with the standalone scenario, “Free Seattle”. 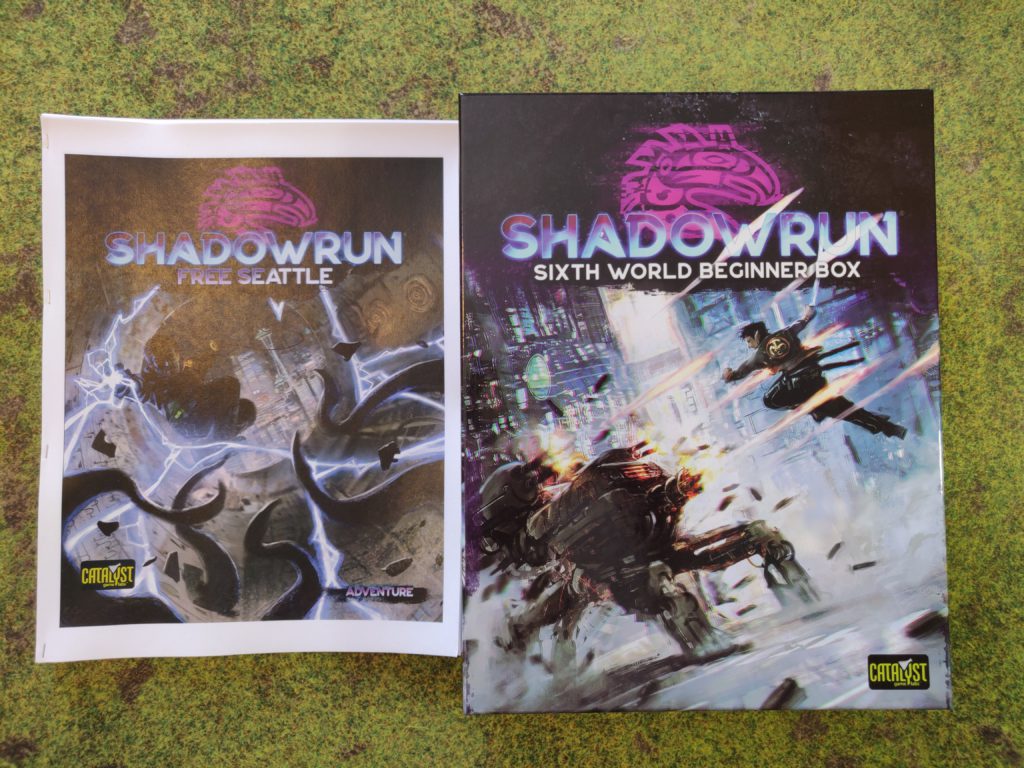 For this mini-campaign I will be acting as the gamemaster while running one character and the Elder Minion will be running three characters. I’ve decided to base the game in Seattle and will be kicking things off with the adventure from the Beginner Box, “The Battle Royale”, which I estimate should cover our initial session. We will then move on to “Free Seattle” for the bulk of the playthrough. This approach will give us a shot at two introductory level adventures which should allow us to get the most out of the basic rulebook included in the Beginner Box. Plus it allows me to focus on gameplay and the rules rather than adventure design.

The Elder Minion will be playing three of the characters from the Beginner Box while I will be running the fourth. This allows us to play all four of the starter set characters and have solid coverage in terms of skill sets.