With our starter set characters setup and tool cards distributed, we kicked off our first session of Shadowrun: Sixth World. Starting off our playthough, the Elder Minion will be running three of the pre-generated player characters and I will be running the fourth as well as handling gamemaster duties. As a reminder, we will be starting with the adventure from the beginner box set entitled “Battle Royale”. 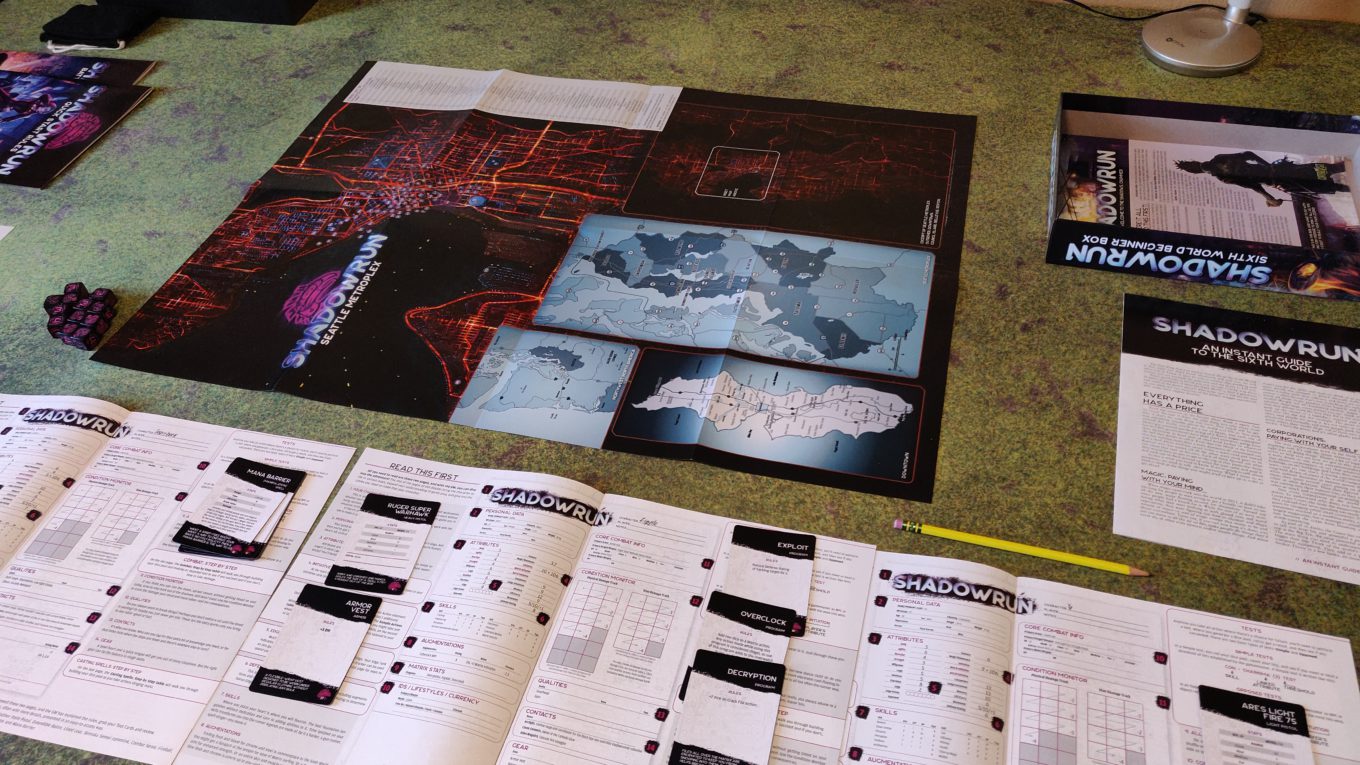 Something that really struck me as we got setup for this session was the organization of the pregenerated character packets. The booklets for each character contain the character sheet along with a guide explaining each section. What quickly became a frustration was how the character sheet was positioned in the middle of a two page spread with the guide on each side. This meant we had to have each booklet completely opened to reference the character sheets, resulting in twice as much tablespace needed to spread out. Add in the tool cards for weapons, armor, equipment, and spells and we were taking up most of the table. 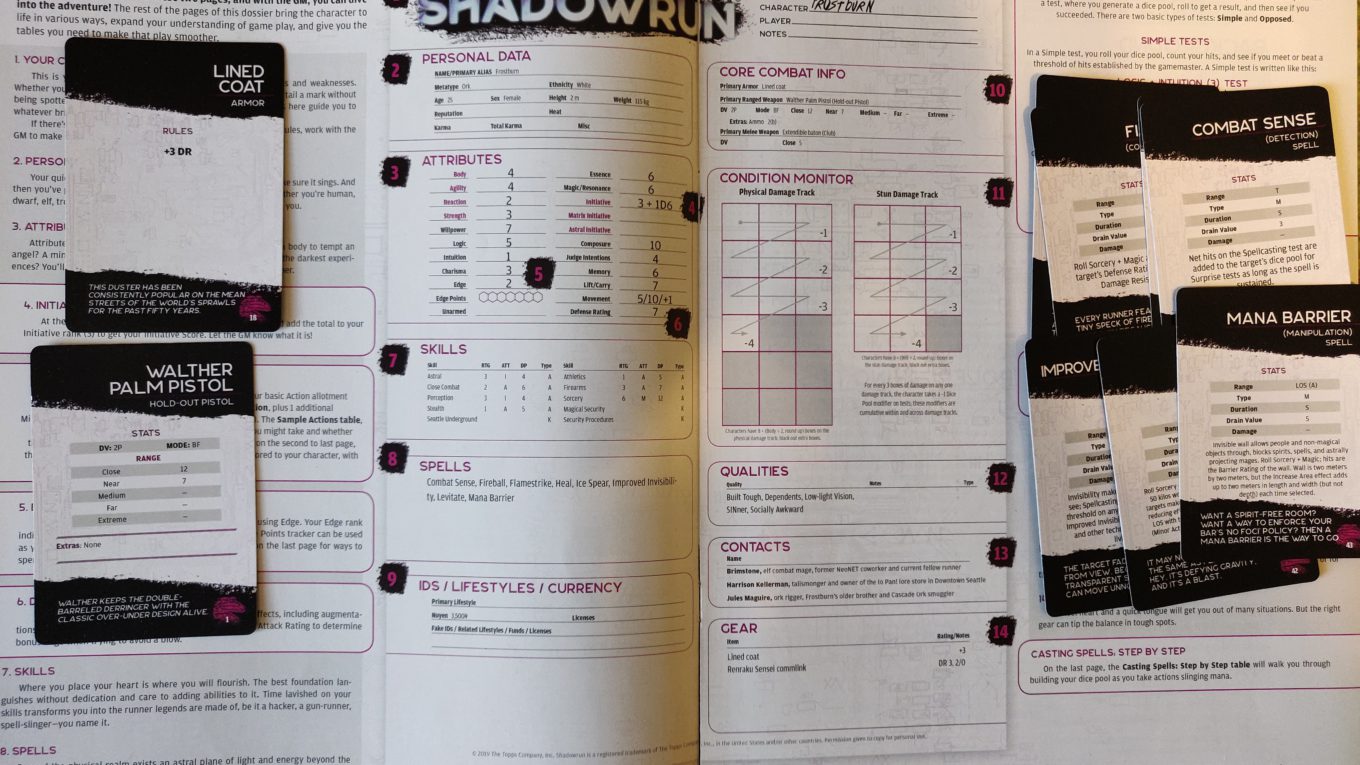 One of the cool things about Shadowrun is that Seattle is a setting so I’m taking full advantage of that. The family and I lived outside of Seattle for two years and the Elder Minion and I decided to have our crew of shadowrunners be from the Puyallup area. We established that they had grown up in the slums together and always looked out for one another. Now grown up and trained shadowrunners, they frequented the south Puget Sound area taking whatever jobs came their way. It really has been fun planning out our adventure in a place that we know and love.

The setup for “Battle Royale” is a classic situation of being in the wrong place at the wrong time. Rival gangs converge on a neighboring warehouse and begin fighting over who will get ownership of the prize, an important NPC with money and connections who has been surrounded and captured. The ultimate motivation for the party to intervene is greed, though the Elder Minion’s initial reaction was to leave the area given how badly we were outnumbered.

Our first step was to scope out the area which allowed us our first opportunity to experiment with the game mechanics. The party’s rigger attempted to hack into a security camera system to check out the surroundings. This presented our first conundrum as I scrambled to decipher the mechanics to resolve this operation. The adventure indicated that the cameras were DR3, which seemed to correspond to damage rating, but there was no indication of what the threshold should be for the skill check or what value to use for an opposed role. Eventually I settled on a threshold of 3 based on the general guidance for setting thresholds.

Once the group got their bearings and advanced the gang action outside to the point of engagement, we got to test out combat. Again, this was an area that took a bit of digging to properly figure out. Understanding what to role for the initial opposed skill checks was fairly painless, but allocating damage based vs the Body roll took a turn initially. It was a couple of rolls before we realized that the damage was multiplied per hit (so three hits with a damage 3 weapon would be 9 points vs the targets Body roll). Once that got sorted, grunts dropped much more quickly.

The other component that I am still working through, which the adventure does not do a good job of guiding, is grouping grunts into a single amalgamation with one attack roll. There was also some initial confusion over just how many hits a grunt could take given that there are no hit points, just a damage tracker.

This initial session definitely had a lot of bumps, but I believe we are slowly getting our feet wet. We have not yet incorporated Edge, though I plan on leveraging it before the end of the battle. I also noticed that the Quick Start rules don’t have any provision for character creation or advancement, nor is there even a trimmed down equipment list. I believe this is going to cut out a portion of the game for us to check out as our characters will remain largely stagnate over the course of the subsequent scenarios.

On a final note, have I mentioned yet how much I really like the design on the dice that come with the beginner box? These are really sweet looking and I appreciate how I can tell at a glance how many successes (5s or 6s) I rolled based on the facing. 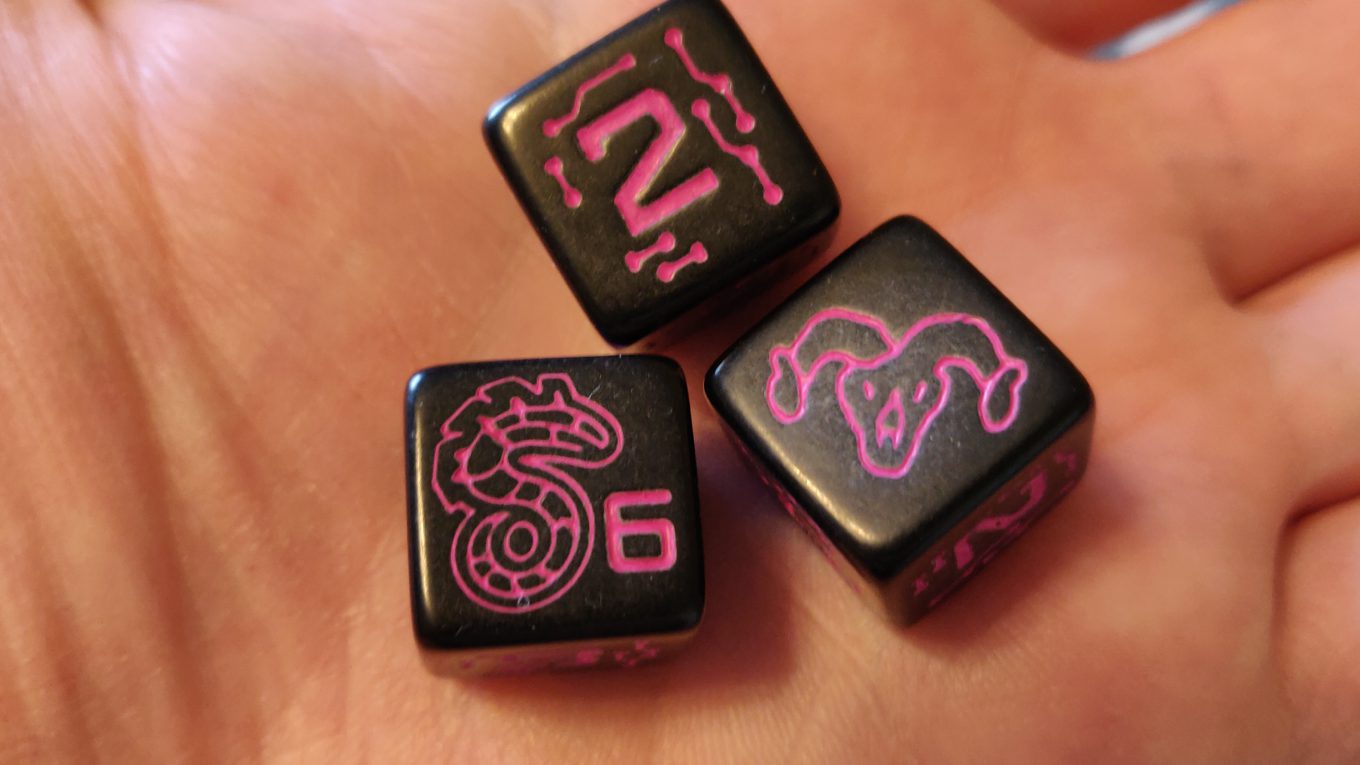