The Elder Minion will be playing three of the characters from the templates provided in the Star Wars RPG core rulebook. We leveraged the template download file from the Fantasy Flight Games website to print a stack of double-sided character cards on heavy cardstock, making the character creation step that much easier.

I’m running this as if we are in the time period short after the Battle of Hoth. The Rebellion is struggling a bit to get up back up and running. My hope is to guide us through at least two of the published scenarios by the end of the mini-campaign.

With character creation complete, we were able to dive into our first adventure. To kick things off, I ran the Elder Minion through the introductory scenario in the core rulebook, “Rebel Breakout”. This was a fun introduction to the Rebellion for the group as Imperial forces ambushed their contact and disrupted the meet-up. The three characters were able to interact with R5-D0 (Dee-O), their contact’s astromech droid, and navigate the unstable mine where the meeting was set to take place.

Our first taste of combat was when a pair of mynocks ambushed the group and attempted to snack on the droid. This was our first opportunity to roll some dice and we did so with gusto. However, we immediately hit a snag as the first edition of the rules does not have a strict initiative system. Everyone’s action happens simultaneously during an “action segment” of the combat round, which is certainly realistic but can be hard to adjudicate. For example, when one character chooses to perform a reactive dodge against another character’s attack while also firing at said character as their declared action. This dodge attempt has downstream impacts on additional dice rolls including the dodging character’s actions, so determining who goes first is quite important. In these instances, the characters make their skill rolls simultaneously, and whoever has the higher roll has their action resolved first. With only three player characters and a limited number of enemies, this sort of opposing rolls scenario happened quite regularly.

Luckily the mynocks put up little fight and were easily dispatched with some well-placed blaster pistol shots. Further encounters through the mine involved several run-ins with squads of stormtroopers, a room on fire, and a dangerous climb down to the level below. The group was able to meet each challenge with success, through not without some bumps and burns along the way. At last, the team discovered their wounded Rebel contact and a set of Y-Wings waiting in a cavern. With imperial AT-AT’s approaching, the group fired up a pair of the Y-Wings and successfully made their escape, thus ending the intro scenario.

Now that the Rebellion’s newest recruits had arrived, it was time to dive into our first full scenario. Based on some excellent feedback from the Star Wars RPG Facebook groups, we are kicking it off with “Strike Force: Shantipole“. I’m really excited to dive into this scenario because it guest stars none other than Commander Ackbar, before his promotion to admiral. Love it! 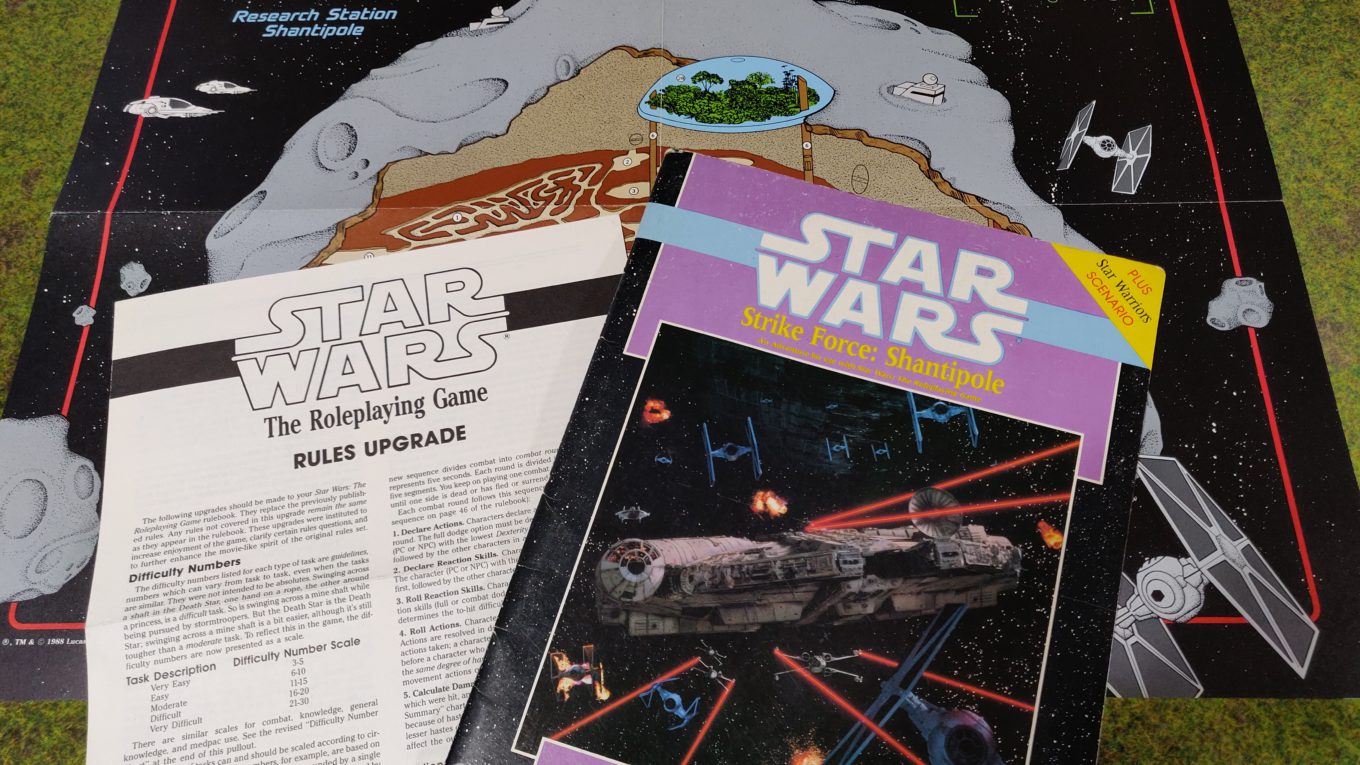 Another pleasant surprise with this scenario was the inclusion of a Rules Upgrade insert. This four-page booklet acts as a bit of an errata for the first edition core book and streamlines a number of the rules. The first one I immediately noticed was the handling of initiative and combat rounds. Establishing that actions happen in the order of lowest Dexterity dice to highest really helps minimize the confusion of combat. This is going to be quite the benefit going forward.

We kicked things off with Strike Force: Shantipole and have worked our way through the initial scenes of the first Episode. Piloting an old freighter assigned to them by Alliance Command, the group has successfully fended off a squadron of TIE/rc fighters before rendezvousing with the secret Rebel base in the Roche asteroid field. Next session we will pick up where we left off and hopefully complete 2-3 more Episodes in the module.

So far we are having a blast with the scenarios and the rules. There are definitely some rough edges as you would expect from the first edition of the RPG, but the Rules Upgrade insert will hopefully smooth several of them out. I’m looking forward to working with the Elder Minion to upgrade the characters after this scenario and perhaps even acquire their own starship. More to come!