Our third session of in this Star Wars RPG mini-campaign saw us working our way through the final pieces of the “Strike Force Shantipole” scenario. This was a daunting task given that the Imperial forces had quickly overtaken the base and the team had few resources to work with.

The Elder Minion’s mission was to infiltrate the captured base at Shantipole and to either recover or destroy the B-wing prototypes along with the rest of the data on them. Commander Akbar and Suskafoo the Verpine were on hand and the team had a full schematic of the base to review before making their move.

The scenario gives several options for how the players can enter the base. The Elder Minion opted to enter through some exterior airlocks that were covered in ice crystals, a sure sign that atmosphere was still working. The initial goal was the somehow sabotage the life support systems as a distraction while the team made its way to the computer room to download the data. Afterwards, the group would sneak to the hangar and attempt to commandeer the starfighter prototypes. 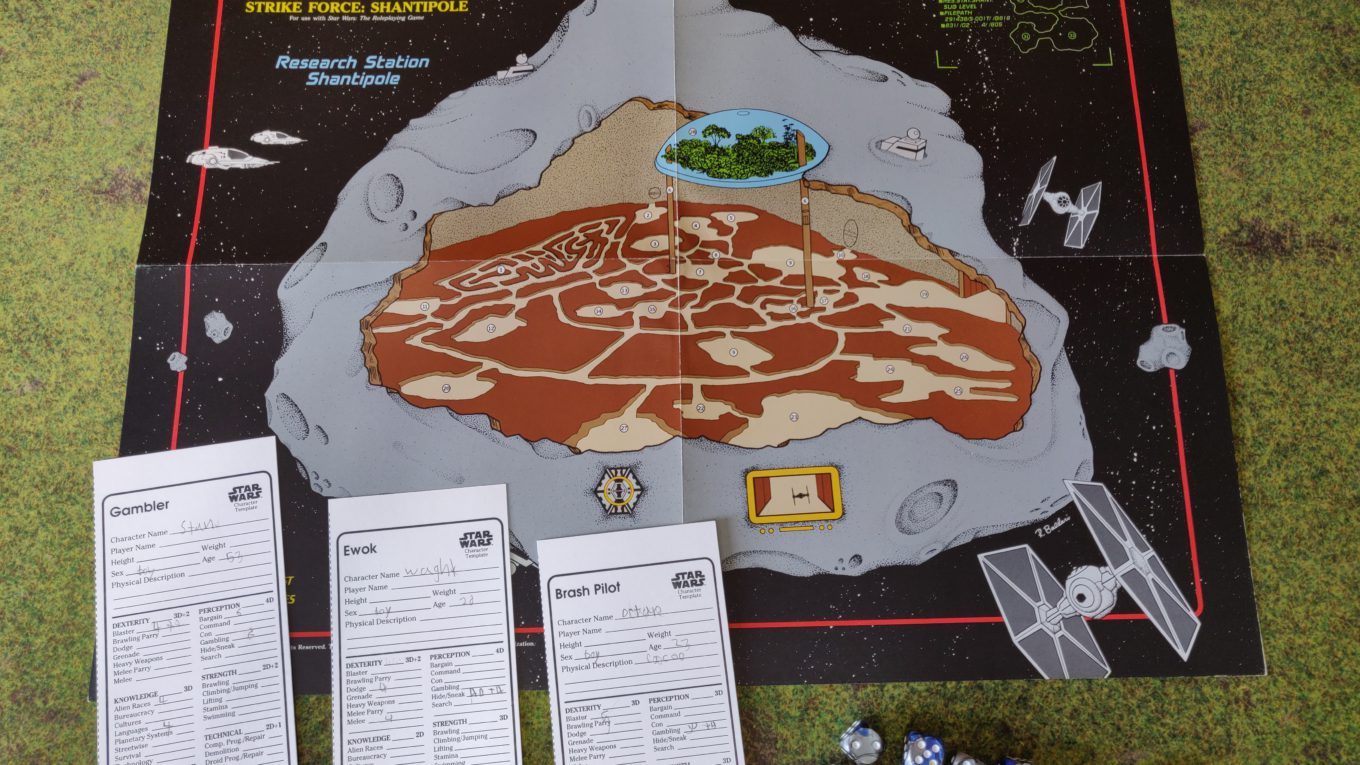 With a plan in place, the group executed the infiltration of Shantipole. The team evaded patrolling probe droids and managed to dock their shuttle at one of the base’s emergency hatches. Clearing away the ice, the team entered the bowels of the ventilation system and, after several harrowing minutes, managed to emerge into a barracks.

Keeping a low-profile was relatively easy (lots of lucky patrol rolls) and the team made their way to the life support control room as a first stop. They quickly realized that none of them had a good grasp on how to control these systems, so instead the focus was put on turning every available knob and pushing plenty of buttons. This had the desired effect of setting off a flurry of alarms and drawing the attention of a nearby patrol of stormtroopers.

Again, the team evaded the patrol which was drawn away from the vicinity of the computer room. This step proved to be much easier to manage than the life support controls, and the team was able to quickly retrieve the needed data without raising a further alarm.

All that was left was to hijack or destroy the two prototypes. Upon arriving in the hangar, the team was horrified to see the sheer amount of Imperial presence in the area:

These were long odds to be sure, but the Elder Minion had a plan. Suskafoo and Waght the Ewok would pop smoke and attempt to free the Vespin, urging them to take the shuttle. Octane the Pilot and Stan the Gambler would attempt to snipe the E-web crew members. And Akbar was tasked with taking down his former executive officer, Salin Glek. With luck, everyone would achieve their goals during the opening moments of the firefight and fall back to the Imperial Shuttle, escaping with the prototypes in tow.

The Force was indeed with the team as the smoke screen combined with Waght’s cover fire allowed the Vespin to slip past their guards and board the shuttle. Both Octane and Stan made impressive long range shots with their blaster carbines and took the gun emplacement out of commission. While Akbar wasn’t able to take out Salin, he was able to distract the traitor long enough to send the technicians scurrying for cover.

The rest of the battle was a running firefight as the team attempted to regroup at the Imperial shuttle. Akbar and Salin were locked in hand to hand combat with neither quite getting the upper hand. Waght was the deciding factor and one swift thrust of his spear put Salin down for the count. With the cargo secure, the team blasted off from the base, using the shuttle’s wings to clip several docked TIE fighters on the way out.

The group now turned their attention to escape and was stunned to learn that the Imperial blockade was blasting apart the Vespins convoy consisting of those who were sympathetic to the Rebellion. The nearest Imperial ship, a Nebulon-B frigate, was all that stood in the way of escape for all. But a frigate is no small ship and the Vespins were largely unarmed. How could the group hope to match firepower with that?

Akbar pointed out that the prototypes were in perfect working order and were fully armed. With a gleam in their eyes the team crewed both B-wings, Octane and Waght in one, Akbar and Stan in the other.

Commander Akbar was promoted to Admiral in a ceremony presided over by Mon Mothma herself. The team was given high honors for the daring rescue and escape. What new adventures are in store for our group of intrepid heroes next?

We made it! The Elder Minion and I have finished our mini-campaign for the Star Wars RPG and we had an absolute blast.

Some of the things that we stumbled on:

So there you have it, we have come to the end of our time with the Star Wars RPG. Will the Elder Minion and I be returning to this system in the future? Heck yeah! We still have a couple of modules on the shelf to try and the excellent Star Wars RPG community has shared more great recommendations for us to check out as well.

Thank you for joining us for our playthrough of the Star Wars RPG by West End Games as part of the Tabletop RPG Sampler project. Coming next time…